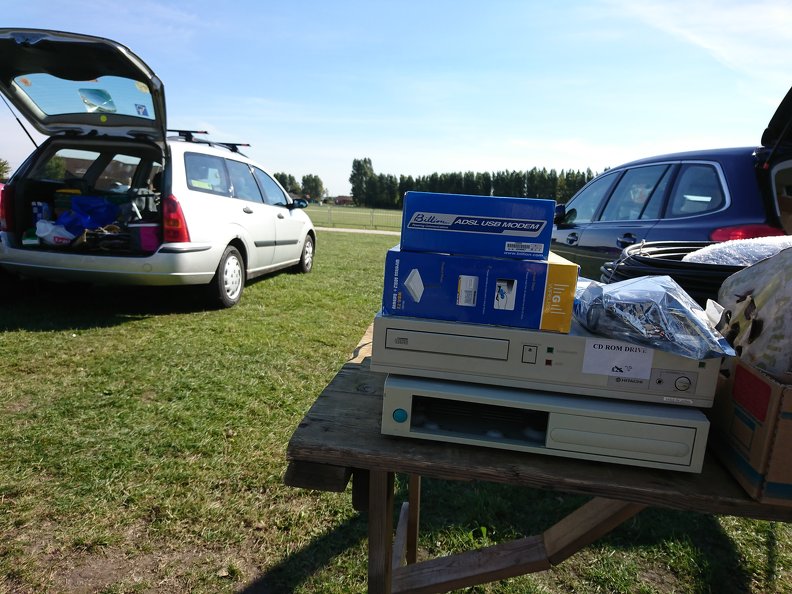 Another in the series of radio rallies! It's the second time I've been to this particular event, known as the "Hamfest". It's the big convention for radio hams. Now, I'm not one myself, as you probably know, but there's nothing better than going around and checking out some of the vintage computer equipment.

This year, it really did not disappoint.

Things I was tempted by, in no certain order...

An Atari ST... I've always been a fan of "vintage" computers, and I've never owned an Atari of any description. Didn't look like it came with any disks or cables though, but it did come with a mouse. Obviously, condition could have been an issue, and not seeing it working meant I wasn't interested. These older machines can have loads of things wrong with them, and it could have been more costly to repair. Also, the keyboards for the Atari ST were terrible. Nowehere near as good as the Amiga.

This thing was a beast, and there's absolutely no way I'd have been able to lug it around, definitely not with my little arms. the guy at the stall had it working somehow. Apparently, it doesn't have its own battery, and instead runs off 10 C-Cell batteries. That keyboard looked nice though.

I've always wanted an unusual machine to blog on, and that would have been a contender. I don't have a machine capable of reading floppies now though, so getting potential drafts from the machine to the internet would be a bit of a pain. I somehow doubt this machine will have been capable of browsing the internet!

The absolute weapon of a CD-ROM drive...

The guy wanted £20 for it. Not pictured is the massive ISA card on top that actually controlled it. Utterly, utterly useless to me, but it was interesting to see a CD drive of that size. It'd be interesting to know if it has any practical use in this day and age. I suspect not!

There's also the guy selling massive bags of apples for £1, and the 2nd hand book stall. If only I could read, I'd have picked up some.

Overall, a very good day. Not pictured, but I did see two deer in a field, and apparently, there was a ferret and a squashed badger on the way there too.

Probably the last proper day out of the year. There'll be one more in November, at Spennymoor.