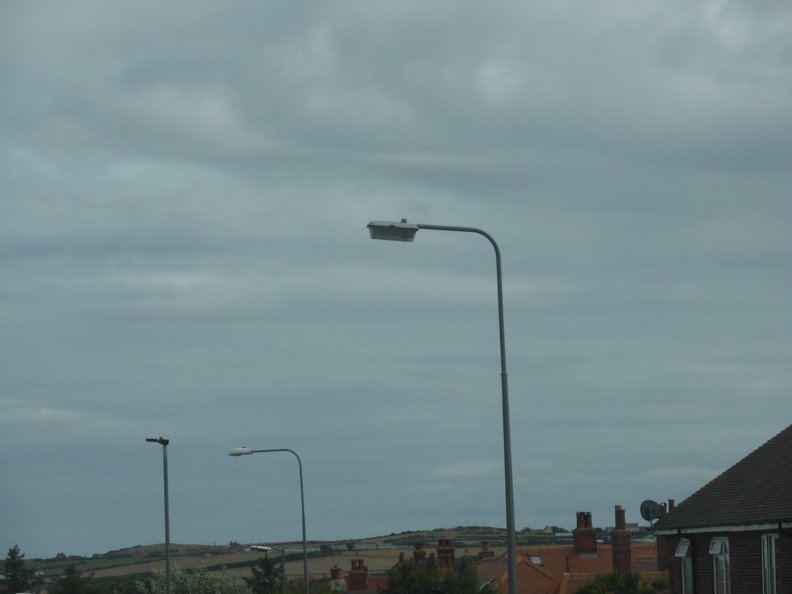 This had all the makings of being an epic bank holiday. I'd made plans to go to Whitby with Chris. It was originally going to be Northallerton. but as there's not a lot to do there, other than the record shop that would have been closed, we decided Whitby would have been a better option.

As can be seen, most of the journey from the outskirts of Guisborough was spent looking at the back of the same caravan, which was not the most scenic thing on the planet.

We finally got into Whitby, and I, as always offered to pay the parking. I go out to look for my wallet, aaaaand, it's not there. It suddenly occurred to me that I'd forgotten to pick it up from the table on my way out. Well, today was going to be fun.

We couldn't find a space there, so headed off to the "west Cliff" car park, near the leisure centre. It was a farther walk, and we somehow managed to get completely lost, ending down a werd cul de sac, made of prefabs. It was like a step back in time. There were even some GEC post-tops, which I haven't seen since Hartlepool moved to LED. Anyway. We eventually found a parking space, and I reluctantly asked Chris if I could porrow some money. Yeah, me. Borrow money. Those words are literally a foreign language to me., and every utterance of the phrase felt like a dagger through my soul. I know he must have been pissed off, but it was either that, or be completely stranded.

Ugh. Just the thought of owing someone money, even if I have reduced the fee to £17.50 is carving me up inside. A win on the penny draw at then Truefellows sorted me right out. I wasn't there, so I asked Daddykins to give the money straight to Chris.

Otherwise, a good day. The charity shops were a bit of a washout, and the antiques shop we went into had a stunning stock. Mainly because they were charging £16 upwards per record. No, thank you.

I almost piccked up the Rocky Horror Picture Show soundtrack up for £1.49, and I would have, if any of the money I was carrying was actually mine. I might regret not buying that, but I probably won't