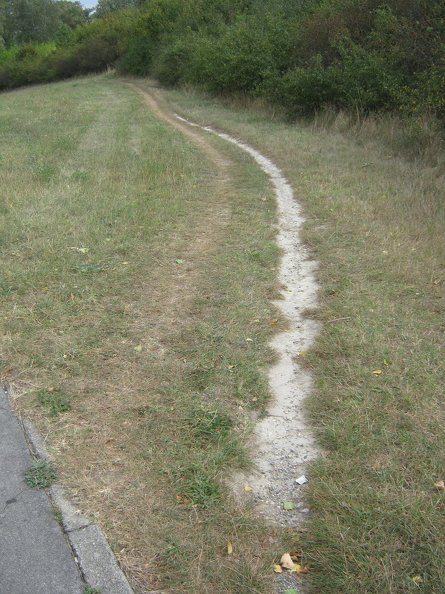 I've always had a bit of an ambition, spanning from (I believe), a 1980s copy of "Your Sinclair", describing something as being "the best thing this side of the Danube". Anyway, I wanted to experience the other side of the Danube, and it really was blue. Oddly, the only use of that "best thing" phrase I can find is on a Star Wars website... Google, you have failed me.

We got on the "purple" line, and headed towards a station close to where the Danube was. We get off the train, and we're presented with something odd. A completely empty tube station. In fact, there was nobody around. Not a soul. Nothing. It was quite apparent that we'd strayed some distance off the tourist trail, and I loved every second of it. The only way to cross the Danube at the point was a footbridge / cycleway underneath the A23. It's a major road by the looks of it. It would appear we were on the wrong side of the bridge. One side is a cycleway, the other side is a footpath. Turns out we went the wrong side. Never mind. This one was the most scenic, despite the cyclists hurtling past us at a hundred miles an hour. Give or take.

Som we're at the bottom of the bridge. It turned out that the Danube is split into two, and hat to cross the full river, we have to walk down a cycle path, which would lead us to a footbridge, taking us to the other side. Jonathan inspected a sign, and I agreed that we'd need to head down this path, and we'd soon come across another path in a few hundred yards, and a bridge to complete the journey.

I even managed to get a photograph of my feet in the Danube.

Well, OK, my boots in the Danube.

A mile and a half later, we finally reach this footbridge. Don't get me wrong, I enjoyed the walk. It reminded me of the HArt to Haswell walkway to some extent, except that we were in the middle of a city. We ended up in a small suburb, cutting through a park, with some rather dubious looking characters. And it looked like it was about to chuck it down. Thankfully, it remained dry, until we reached the tube station.

It seemed like we'd walked for miles, but Endomondo told us differently. Bah. Now, I have no idea whether this was because of my shoes, socks, or just... something else random, but this was the end of my feet. I got back to the hotel room, only to find there were blisters where I'd never had blisters before. Bugger.

Despite this, it didn't stop us playing pool for another good few hours.