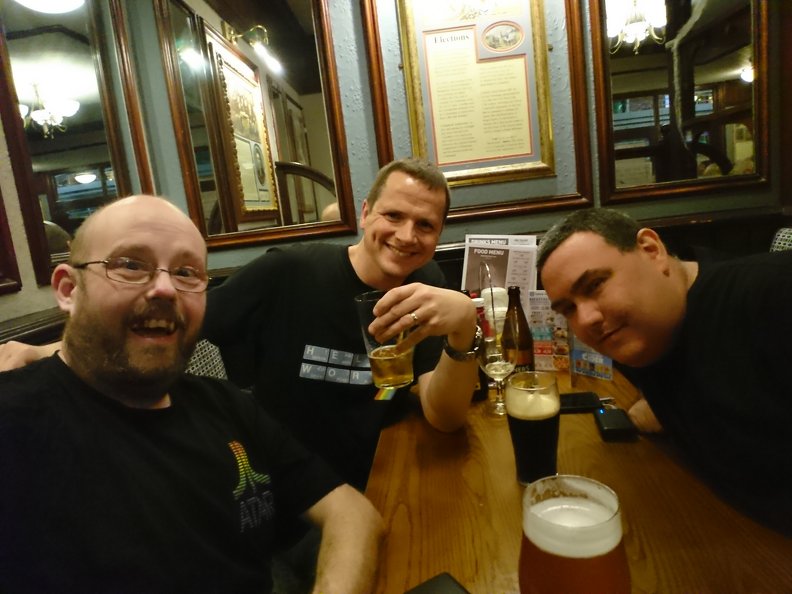 It's the last weekend in October. It's pissing down, that must mean it's time for only one thing.... Carlisle! Ah yes, the annual get-together of #speccy and WOS people. Apparently this year, there's going to be three of us. What a turnout! Hopefully Marko has enticed some more people to come.

I'm currently sat in the train station. Cold, wet, because some twat of a driver went through a puddle. At least it's all under cover now until I get there.

The trains look like they're going to be fun. I managed to get the only working train by the looks of it.. If I'd have waited for the 10:05, today would have been off because that train is cancelled.

10am now, and I'm on the train. Rosi got on, on the way to Newcastle so talked to her all the way up. Surprised how much she hates the company that she used to work for. Part of me is glad that I didn't end up there.

Just gone through Dunston station. Metro Centre is the next station. I don't think the weather has brightened up any either. It's supposed to turn out nice.

I've not got my headphones, meaning I'm getting to hear every little conversation. I've also just realised that not getting off at Newcastle has meant that I didn't get to go to the beer shop. Bugger. Mind you, I probably wouldn't have bought anything.
When i got here, it said that the 09:05 one was going to be late. It no longer says that, as it now says it's on time. Wish they'd make their mind up. The driver must have really put his foot down.

It's approaching 11:28 now and I think it's only about 20 minutes until the train is due to pull in. Daddykins just called me on Facebook messenger. I think it's the first time I've used it, except for the odd voice call when Jamie's phone wasn't working. Quality wasn't all that bad, though due to the sound on my phone being a little wank, I couldn't hear him very well, without having to put the phone up to my ear, and giving him a full, high vesolutoon of the acculuated grease in there.

I can't wait to get out and have a walk around though. I don't know if I've twisted my foot or something though as I'm getting a nasty muscular pain when I move it too far. Not great.

The weather has perked up a little. No rain since I left Newcastle, and there's blue sky in the distance. You never know, it might turn out alright. Bit chilly though, and standing at Hexham Station was the first time I've shivered for ages. I came out of the waiting room, only for the heating to kick in.

Day two of my epic adventure to Carlisle, though it's gonna be a short one, as I'm already at the train station. Suppose I could pick up where I left off, as I didn't type anything about actually getting to Carlisle.

Anyhoo, it goes without saying that the train arrived, and my first stop was the charity shops. I think the first big road I go down is called Borchergate. I remembered from. Previous years that there was quite a few down there.

The numbers seemed to have dwindled slightly, and the old record shop now had a new building on it. I shouldn't have been disappointed, as I still managed to get a good few CDs, which I'll look forward to cataloging and ripping later.

I needn't have bothered worrying about the record shop either, as it had simply moved a few doors down the road. It also seemed better organised than last time. What was even weirder is that the guy actually remembered me. I explained where I was from, and why I was in the vacinity, and he said he remembered! It's at last three years since I was last there, so I was impressed at his memory.

I spent the rest of the day walking around the other charity shops, but not before getting some chips from the chippy.

I did enjoy them, but not all of them were consumed, as more charity shops await.

I probably could talk more about them, but I'll save it for later. It's more fun elaborating when you're drunk. But there was the posh guy in the BHF..

I also managed to find 5705 by City Boy on CD. Been after a decent copy of this for ages. No doubt I've already got it on CD somewhere without actually realising.

It was about 2pm at the point, and with the charity shops pretty much exhausted, I headed off to the hotel. This was where the majority of the photos came from, as the walk down Warwick towards the Premier Inn was very picturesque, especially with the autumn leaves littering the paths.

I arrived at the hotel, and was given my room key. For some reason they asked my nationality. I found this rather strange. Unless it was getting done for some type of statistical purpose.

The room itself was housed in the annexe. A little building that had extra rooms. Maybe it was built after the original hotel to provide extra accommodation. Dunno.

The room was as expected. Bed, bath, bog. Comfy bed. I watched a bit of racing until Marko contacted me, and told me he was ready. We got a taxi through to the town.

Our first and only stop was going to be the Wetherspoons. It was about 4pm by this point, but already the place was absolutely bouncing. Initially we couldn't find a table but eventually we found one shortly after Gérard turned up.