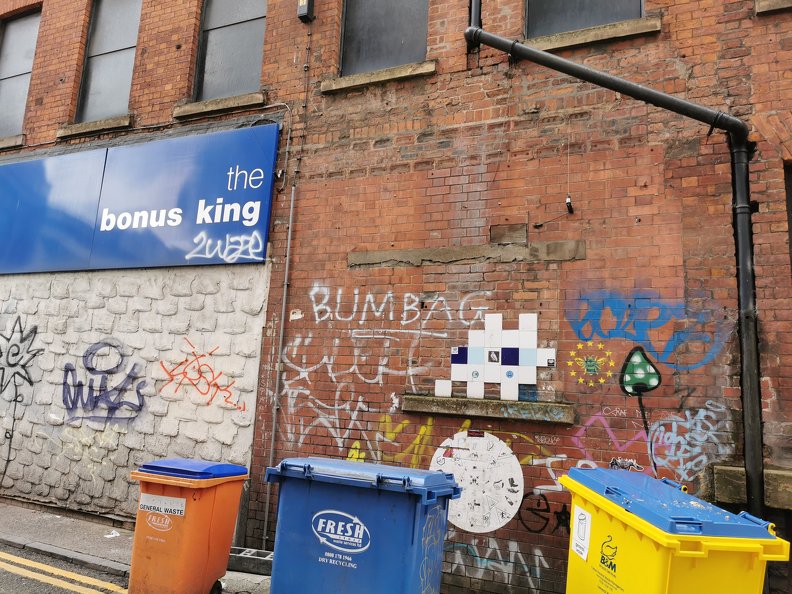 The first trip out anywhere this year, to Manchester. This is the first day away anywhere outside of the north east for a very long time, possibly since Carlisle back in October, so it was really nice to have a change of scenery that wasn't Newcastle or the Metrocentre. It's 1,204 days since my last visit to Manchester City Centre in 2017.

his is the second pverall day of having to wear a face mask everywhere you go. Every shop requires you to wear one, and I was extremey surprised to find that everyone appeared to be taking notice of the new rule, even the young 'uns. Of course, there was the odd knob that wasn't taking notice, but in total, I only spied a few people walking around the Trafford Centre who weren't wearing a face mask.

There was obe shop that may have been of interest. It looked like HMV, but it was only for music memorabilia, and a few LPs. I think it's where HMV used t be, so maybe they're just doing a reduced store under a different name. I'll never know. There was nothing there of any interest for me. There was a jacket I quite liked. Probably should have picked that up now that I think of it. Never mind.

I didn't find anything else that was worth buying at the Trafford centre, but it was nice to get some new pokestops under my belt. Not that I play that game anymore. At all. Ever. Cough. It was still early, so there was plenty of time to go onto the city centre. Surprisingly, we didn't get lost going to the city centre. It seems every time we go there, we end up getting lost and ending up near the shopping centre, but nott quite. This time, we managed it, and ended up parked in record time. Wahey. We were parked at the Arndale centre, and I was happy to see some familiar landmarks, and some shops. Of course, HMV and That's Entertainment have both closed, so I know my chance of getting CDs was extremely limited. Oxfam was closed, and Cash Generator have stopped doing these.

Off we went to Afflecks. I'm sure I've talked about this before, but it's a large building split into independent units. I, of course, was intersted in the old record store that was there last time I'd visited. I'd grabbed some good 12" singles last time I was there, so I'd be interested to see their new stock.. Except I couldn't find it. There appeared to be something else where it once stood. I thought it had gone for good. Thankfully on the way out, I took a left turn, and there it was. New location, plenty of new stock.

Sadly, I knew that time wwas limited, and I was with someone who didn't really appreciate my love for record shops. I didn't spend a quarter of the time I could have in there, but due to restrictions on how many people could have been in the store at any one time, it didn't feel right for me to be in there for long.

Of course, I didn't come out empty handed. Hidden away in the corner was a series of "Mystery Bags". a set of 8 12" records for £2. And of course, it'd make an interesting unboxing / unbagging video, whatever you want to call it. In fact, I bought three. Of course, I've already recorded the video where I opened them, and the results were.... Well, they weren't great unfortunately.

I maybe got a couple of funny moments out of the video so that'll be at a YouTube stream near you. Possibly.

So, really, that was it. Oh yes, I must give a honorable mention to the grafitti artists who calls himself (or herself, naturally), "Bumbag". This gave me quite the chuckle.

Overall, this has broken the record for the most amount of photos taken in one day, approximately 5,493 photos. Not a bad record overall.