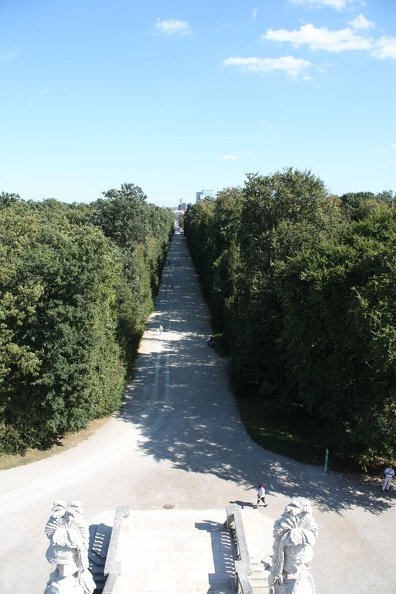 Day 3 of the Vienna Holiday

We once again headed onto the underground, and this time headed in the direction of "Schloss Schönbrunn", the former home of the Austrian royal family before they all, erm, died. I'l just start off by saying it was rather large. There was also a tour, coming in at the cheap, cheap price of €16. You get a free audio-guide thing, which is handy, because without it, you'd know pretty much nothing about the place. For that price, I'd expect to be able to keep the bloody thing, but no, you have to put it into a box at the end of the trip. Annoyingly, two of the main rooms were under renovation when we went. You weren't allowed to take photos in the palace itself.

One thing that totally pissed me off about a lot of tourist attractions was the "exit through the gift shop" culture. Maybe other places did this in other holidays I've been on, I don't remember, but I hate it.

After the trip, we became separated. Jonathan went one way, me and Chris went the other. I attempted to phone Jonathan to let him know where we were, totally forgetting that we were about 900 miles away from home, and Vodafone passport had a 75p connection charge...

Remember that VAT needs to be added to that. What's even worse is that I incurred that charge because it diverted to voicemail. Bugger.

We reunited mere seconds later, and decided to head off to the gardens. Now, these were absolutely massive. One thing I regretted about the Berlin trip a few years ago, was not being able to stay and explore the gardens of "Sans Soucci", in Potsdam. I wasn't going to miss out on a second epic photo opportunity. This was almost jeapordised when it became apparent that Jonathan had lost his ticket. I don't think I've heard as many swear words fly from his lips without him being being a steering wheel.

Despite bags being emptied, pockets being ravaged into an inch of their linty lives, the little piece of paper was nowhere to be seen. Off we trudged to the customer service desk, three faces like thunder, expecting to pay another €16 for a ticket. Amazingly, and in a rare glimpse of customer service brilliance, the lady behind the counter recognised us, and without hesitation, printed a duplicate ticket.

This was the view as we walked out into the gardens. Stunning. The best was yet to come. For me, anyway. We'd walked around the gardens for a bit, and I really wanted to see what that big fuck-off monument looking thing was. Neither C nor J fancied the uphill walk in blazing sunshine just to see what it was, so I walked it alone. I must admit, what happened next was probably the best part of the day for me, and an accidental discovery.

I walked up to this monument thing, and noticed a grey haired guy struggling with his ticket at a turnstile that apparently led nowhere. You were free to walk around the base of this thing as much as you wanted. there was even a cafe. Just for funzies, not having a clue what it did, I put my ticket in. Bing! Admit one. It wasn't until I looked to my left, I noticed a stone spiral staircase going upwards. It led to the top of the monument thing. The photo opportunities were just stunning.

I felt a bit guilty spending as much time as I did there, knowing that C+J were cooking in the sunshine somewhere on the terraces while I spent about half an hour up there. The selfish side of me, however thinks, meh, their tickets were valid for this too! You should all know by now that I'm a believer in karma, and I'm sure the extra distance I walked would be the price I pay for this small time on my own, and these amazing photos.

I went back down and found C+J. One thing I didn't realise is that these gardens are so large, they actually have their own zoo. Unfortunately, it was an extra €10 (or something), and although I actually wanted to go back, I'd forgotten about it. My life is slowly ebbing away. Will I ever take a decent photo of a meerkat?

It was still relatively early by this point, and there was still some of the garden to visit, mainly the maze. One of my life's ambitions was to be in a hedge maze at some point. I remember, as a kid, being bitterly disappointed by the maze in the maze in the old Hartlepool museum, I expected it to be a massive hedge thing, instead it was some wood on the floor with gravel. I am happy to report that this maze is indeed made of spruce...

There was also a "labyrinth". It seemed odd that we managed to walk for 10 minutes on a piece of land that is 47 metres from one corner to another. At the end of it were some genuinely memorable photo opportunities, as this was the moment that my big Canon rolled its file number over, from IMG_9999.JPG to IMG_0001.JPG

I think you'll find it's a fitting photo.

By this time, the heat had all got to us, and refreshments were in order. For the first time since I was 12, I had a Calippo, and they were just as good as I remembered them. Chris also joined in the sentiments and purchased the afore-mentioned frozen treat, whereas Jonathan went for the traditionalism, and settled for a Cornetto. I'm not sure whether it was the bright red shirt I was wearing, or whether the sugary treat had done something else, but I seemed to be irresistible to wasps for the rest of the day.

I think my only disappointment for this part of the day was the fact I wanted my photo taken in one of the disused guard towers. Unfortunately, the overpowering smell of piss knocked me back.

We had a sit down (and I sheltered from the wasps) in the shade of the main building, yet I still wanted to get up and take photos. Jonathan did a good job, with amazingly accurate timing, of trashing this one!

The camera was packed away, and we headed back to the hotel. After exactly two hours, this was my walking pattern, including the maze walk...